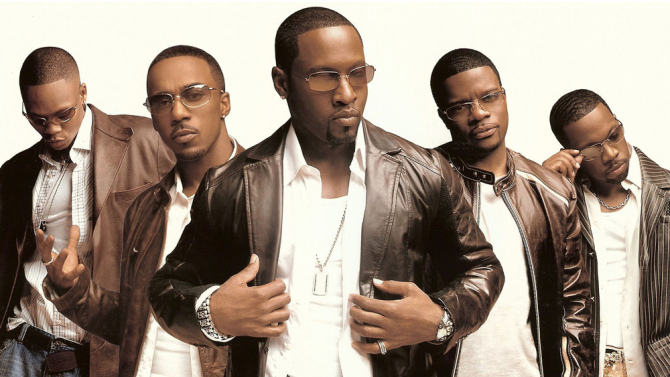 ​NSYNC. Backstreet Boys. One Direction. New Kids on the Block. Boyz II Men. It’s hard to find a person who knows nothing about “boy bands” because of the massive success these groups have had. However, these boy bands that we have come to love (or hate)simply would not be the same were it not for the legacy of one famous pop/R&B boy band: New Edition. Originally from Boston, this outfit was composed of Ricky Bell, Michael Bivins, Ronnie DeVoe, Ralph Tresvant, and Bobby Brown (who would later be replaced by Johnny Gill). BET’s newest miniseries, a biopic titledThe New Edition Story, which premiered on January 24, chronicles the journey of the band from its humble inception to the group’s legacy, as well as the trials and struggles that the band faced in the years between. The New Edition Story is split into three segments that all detail a different chapter in the band’s evolution.

​New Edition’s origins can be traced back to 1978, in the housing projects of Roxbury, Boston, where founding members Ricky Bell, Bobby Brown, and Michael Bivins would sing together in elementary school, hoping to perform to earn some cash. They recruited friend Ralph Tresvant later, as well as a fifth member, Ronnie DeVoe, after winning a talent show in 1980. After performing the Jackson 5’s “The Love You Save” at a local gig, the group caught the attention of producer Maurice Starr. Starr signed the group to his small Streetwise Records label shortly thereafter.

​The group’s first single came with “Candy Girl” in 1983, a song Starr co-wrote for the group. New Edition’s 1983 debut, also titled Candy Girl, saw a breakthrough success with the hits “Is This the End?” and “Popcorn Love,” catching the eyes of MCA Records, who offered the group a deal. Following the group’s first major tour to promote their new release, the tour bus dropped the group off back at the projects. A financial dispute arose after the group discovered that the checks they got in the mail amounted to a measly $1.87. Tour budget and expenses were claimed to be the reason the group wasn’t paid more. The group now wanted out of their contract, hiring a law firm to sue Starr and Streetwise. This move led to the release of their 1984 self-titled second album New Edition, nowunder a new label. The album eventually went double-platinum, peaking at #6 on the Billboard 200 and number one on the Billboard Top R&B/Hip-Hop charts. It spawned three Top 40 singles: “Cool It Now,” “Mr. Telephone Man,” and “Lost in Love.”

​The band soon discovered that they were in a restrictive production deal; the record deal they signed was not actually under MCA, but rather a production comapny called Jump and Shoot that had its own deal with MCA. The band members had to borrow $100,000 to be able to record for MCA directly, effectively mortgaging them under the label. The group’s 1985 album All For Love became the first in a line of albums and tours to pay off their debt. Other issues arose; Bobby Brown’s increasingly problematic behavior led to the group voting him out of the band in December 1985. Shortly thereafter, the group’s success with a cover of The Penguins’ 1954 hit “Earth Angel” led to the release of 1986’s Under the Blue Moon, an album of doo-wop covers and the group’s first album without Brown. After the album’s release, the group wished to add a new member to fill the void Brown left, enlisting singer Johnny Gill as a vocalist.
​
​The group’s 1988 release Heart Break, the first to feature Gill as the co-lead vocalist, marked a shift in the band’s musical style from a bubblegum pop sound to a more matured adult sound that coincided with the band members’ own transition from their teens to their twenties. Heart Break ended up being the band’s most commercially successful album at the time, eventually going quadruple platinum. Five singles from the album were released: “If It Isn’t Love,” “You’re Not My Kind of Girl,” “Can You Stand The Rain,” “Crucial,” and “N.E. Heartbreak.” The title of one of the album’s tracks, “Boys to Men,” served as the inspiration for the musical group that became Boyz II Men. The album’s success also led to the group’s successful concert tour in the last few months of 1988, with Al B. Sure and former member Bobby Brown serving as their opening acts.

​Bobby Brown, who had found his own success with his 1988 album Don’t Be Cruel, inspired the New Edition band members to go on hiatus to pursue their own side projects. 1990 saw three of the band’s members, Ricky Bell, Michael Bivins and Ronnie DeVoe, forming the group Bell Biv DeVoe and finding massive success with their debut Poison. Tresvant and Gill also released their own solo albums, both of which went multi-platinum.

​By 1996, New Edition’s splinter groups had reached roughly the same amount of success on their own compared to when they were together as a band. However, after promising a reunion to fans as well as owing MCA another album as part of their contractual obligation, the group briefly reunited to record 1996’s Home Again, their first album in eight years, and to go on tour in 1997. The album became the best-selling of the band’s career, selling over 4 million copies worldwide and yielding the hits “I’m Still In Love With You” and “Hit Me Off.”
​
​The group’s subsequent concert tour, however, resulted in disaster. At one of the group’s gigs, Ronnie DeVoe tried to pull Brown off the stage as he was extending his solo set. Brown dropped the microphone and a fist fight between the two broke out. Security guards were called out, the concert was stopped, and Bivins and Brown ended up dropping out for the rest of the tour while the rest of the group continued the tour as a quartet. The group separated again on a sour note, appearing to be disbanded for good until 2004, when the band (minus Brown) released a new album, One Love. The band’s activity has been picking up momentum in recent years, and rumors of a new album are floating around.

​The New Edition Story’s top-tier cast effectively captures the triumphs and struggles of one of Boston’s most influential R&B boy bands while putting a fresh spin on the story by recording new renditions of the group’s music sung by the actors themselves. The show dives deep into the story as well, revealing interesting details about the band that even the most devoted fan may not have known about. The original run on BET has ended, but all three parts of The New Edition Story miniseries can be found online.